My travelogue on Chettinadu... Part 4 (Keezhadi and Madurai)

We reached Keezhadi around 1.30 PM. The excavation site is inside a large coconut grove. Keezhadi is a small village on the northern banks of river Vaigai. A small road from Silaiman took us to keezhadi. Silaiman is in the Sivaganga – Madurai road. Madurai city is just 10 Kms away from Silaiman. There are lot trenches dug by archeological survey of India (ASI). We could see lots of broken parts of terracotta pots piled up near the trenches. I took some of them as souvenirs. We saw the group of tents (camp) where the archeologists stay for the excavation work. One of the research scholars Mr. Vasanthakumar explained us about the structures excavated there. Carbon dating of the materials has not been done. Yet, he said, the site is believed to be a Sangam age habitation (300 BCE to 400 CE) or beyond based on other evidences, like the types of bricks and the Tamil Brahmi script which was found at the site. In a causal mode, he complained about the poor funding available for ASI work. He went on saying that they are not equipped with a surveyor and a photographer to document everything; carbon dating is also costly he said. The brick structures like small square rooms, the furnace like structures, the terracotta ring wells and the open and closed water ways indicate that there could be an ancient industrial habitat existed at Keezhadi. I wanted to take photos of the materials which were unearthed there; but, Vasantha kumar said that they were sent for the lab already. Their target was Madurai. Since it has continuously been inhabited for more than 2500 years, excavation work is not possible in Madurai. When we left Keezhadi around 3.30 PM, it was humid and was about to rain. 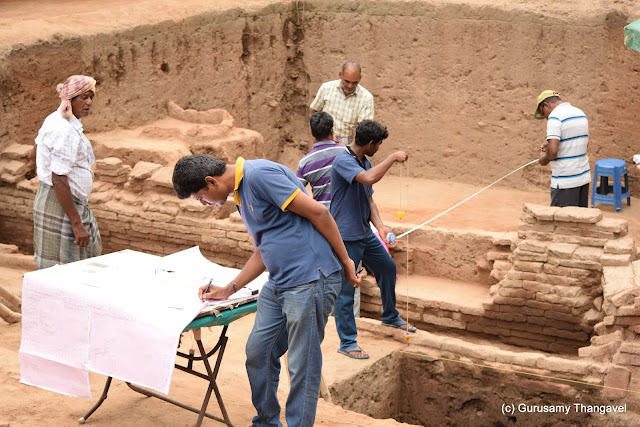 My colleagues dropped me at Silaiman and went back to Sivagangai. I took a town bus to reach Madurai from there. As the bus entered Madurai, it started raining. I got down at Mahal bus stop as I wanted to go to Thirumalai naicker mahal. The Thirumalai Naicker mahal is as old as Taj mahal. In fact, it is slightly older than Taj. The great Naicker king, Thirumalai, constructed it during early 17th century (1636 CE). Presently only one fourth of the structure is standing now. The intact structure is originally the durbar hall of King Thirumalai Naicker. Upon entering the mahal one would get astonished by looking at the massive pillars and the big open courtyard. Some of the pillars are very large than what we could imagine – 19 ft in circumference. In the present day real estate terms one can construct a small house with the space occupied by a pillar. First time, I felt my 18 mm wide angle lens is not enough to cover the entire mahal, such massive is the palace. Sadly, it is not maintained well. I could see a lot of cob webs and pigeon droppings everywhere. Moreover, our lay public also used the pillars to express their petty love feelings. 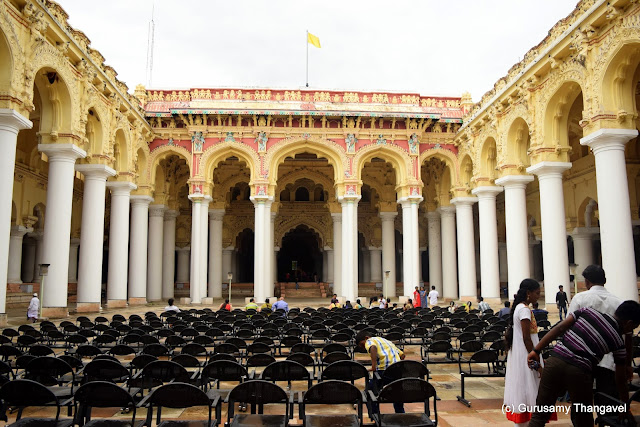 More photos of the mahal can be seenhere…

Finally, I had walked down the road to reach Meenatchi Amman temple and arrived at the Amman sannathi entrance. I have a special place for Madurai in my heart. My first 13 years of life was spent in Madurai and hence, lots of nostalgia attached with it. We often used to come to Meenatchi Amman temple when we had lived in Madurai. I can vividly remember sitting on the steps of the famous golden lotus tank, inside the temple, and dreaming. Sitting on the steps of the temple tank and looking at the magnificent temple towers was my favorite activity. In fact that place is the photographer’s delight too; one can easily identify Meenatchi Amman temple by these photographs. My mother used to come to this beautiful temple on every Friday for Durga pooja. I and my sisters used to accompany her whenever we got school holidays on Fridays. Even after we had relocated to Panagudi - my mother’s native place - for few more years we used to visit Madurai by travelling more than 200 kms, for Deepavali purchase. 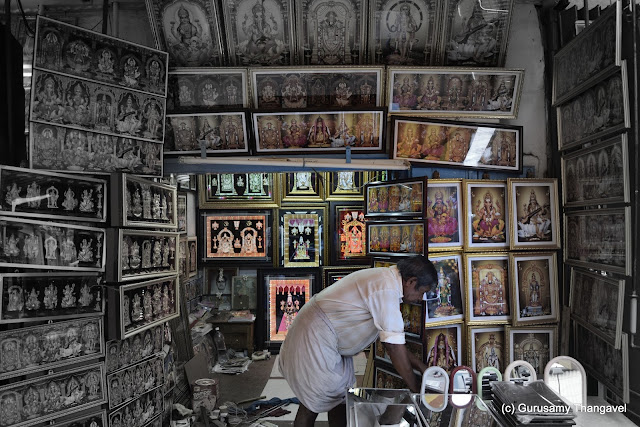 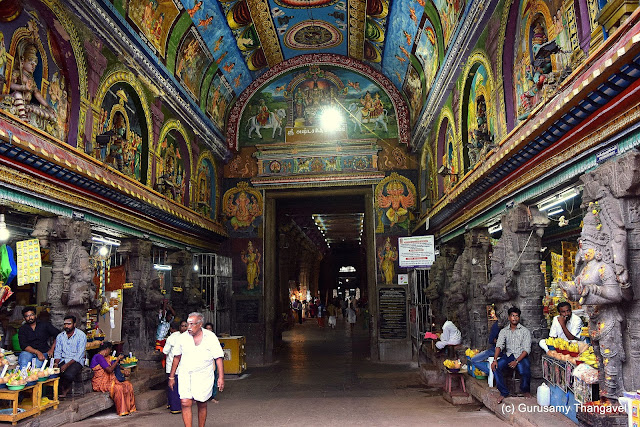 Madurai is one of the very few historical cities in the world, which is being continuously inhabited since time immemorial. Moreover, Madurai was the epicenter of many happenings throughout the history of Tamilakam till the 18th century. It lost its importance to Chennai during the British era. However, with its one million plus population, Madurai is still an important nerve centre of Tamil Nadu. The city of Madurai may not appeal to a modern mindset. Some Tamil writers label Madurai as a macho city. One may get into a wrong opinion about this historical city by viewing some of the popular Tamil movies as they inadvertently wrongly portray Madurai. One has to have a post modern or a cultural mindset to appreciate Madurai. Varanasi is another city which can be compared with Madurai is this aspect.

After taking photos of the beautiful drawings on the Amman sannathi entrance doom, I had a dilemma of entering inside the temple or not. My train to Chennai was at 7.45 PM. It was already 5.30 PM. Two hours, at least, would need to cover inside of the temple; hence, I decided to take photographs from outside. Moreover, I was terribly tired as I didn’t have proper sleep for two nights and the continuous travels also added into. I could sense that I am aging too :-) 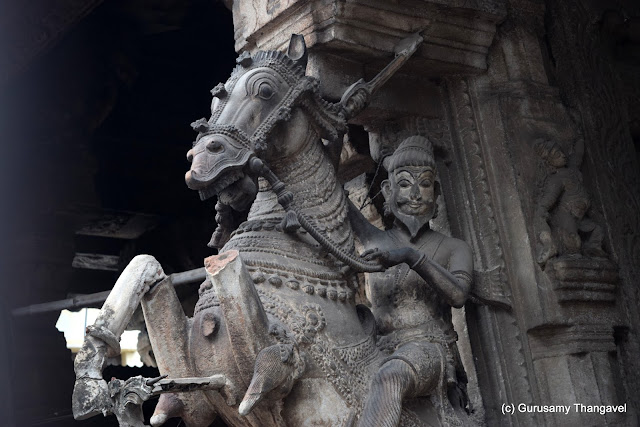 First, I went inside the Pudhu Mandapam (New pavilion), which is opposite to the majestic Eastern tower to take photographs. Pudhu mandapam is also a contribution of King Thirumalai nayak for the Goddess Meenatchi. It has lots of fabulous sculptures; but, the temple administration has rented the space for small shops. During my childhood, I used to buy text books and the guides from the shops located here. After coming out of Pudhu mandapam, I leaned to the nearby lamp post and started zoom into the Eastern tower with my 300mm lens. I could see, in close range, lots of beautiful sculptures. The temple towers were in their natural colors thirty years before and now they are in bright colors. Some people don’t like the bright colors on the temple towers. They feel that the beauty of the tower and its exquisite sculptures are best appreciated in their natural color than with bright colors. I am not, however, able to judge on that now. To be frank, I seem to like the colored temple towers more. I started walking towards the southern tower and took more photographs of that tower too. One of the sculptures in the southern tower, which attracted me is a god with (Vishnu?!) many heads arranged in the shape of the tower. In fact one of my primary aims of buying a DSLR camera with a 300 mm telephoto lens is to take photographs of these majestic towers and their marvelous sculptures. I am happy that I started fulfilling my objectives. 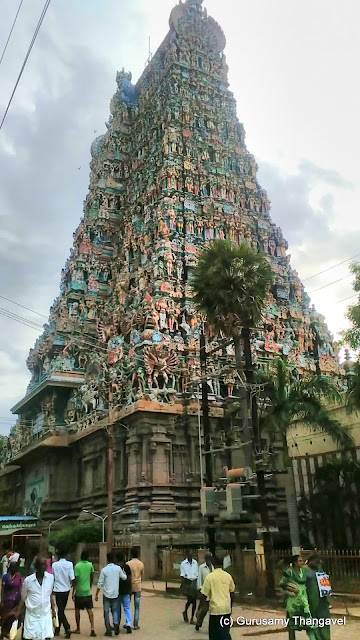 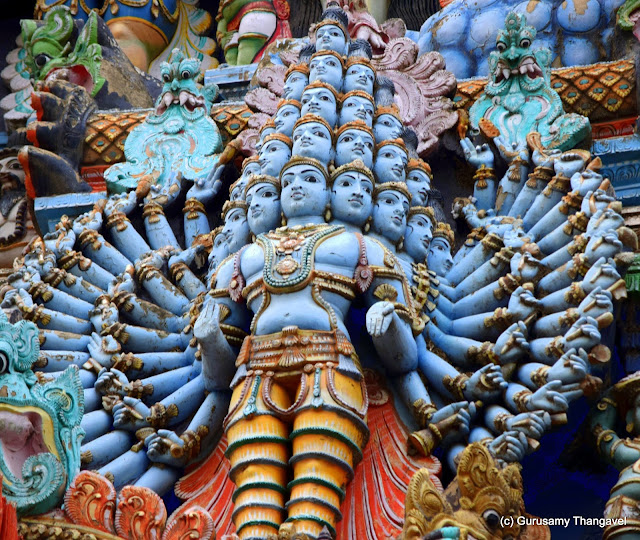 I started experiencing severe headache. I deliberately needed a rest. So I started walking towards the railway station. I know this part of Madurai by heart. On the way to the station, I ate idlis in a medium size restaurant. I bought a crocin tablet too; eat halwa from the famous Prema vilas sweet shop, opposite to the railway station and bought some more for my house too. When I had entered the station it was around 7.30 PM. The train had come on time and I slept by around 8.00 PM and woke up around 4.30 AM only as the train was nearing Tambaram where I had to get down. I felt really happy about my trip, as I was able to go with my meticulous plans. I am not the kind of person who is known to stick to the plans. In this aspect, this trip, in recent times, was a successful one for me in terms of the planning and execution. History is always a fascinating subject for me. I am thinking of visiting each and every district of Tamil Nadu and document the history for my own understanding. I did not even know that a small district like Sivaganga has a rich history until I started planning for my trip. Still I could not cover few other historical places of importance in Sivaganga, like Piran malai - the place of ancient king Pari etc. In those two days I got a feeling that I had travelled through the cross section of the ancient, medieval and modern Sivaganga district. Experiencing the micro history of each region of Tamil Nadu and India is my desire. Travel is the only way one can achieve this. Each region in every part of the world has got its own history from ancient days. But unfortunately, our life time is not enough to cover all.